I’ve been feeling like I would love a mentor to help guide me through the maze of the music business. I’ve been at it for twenty years and I’m still running into novel and ridiculous issues.

So I considered mentors and wrote this piece on Talkhouse.

A quick look in on the Grammy’s provided me with this golden nugget – a transcript of Dylan’s MusiCares Person of the Year acceptance speech. What a treasure trove! I didn’t even have to watch the Grammy’s thank DOG.

I think we were all hurt to discover the Joan Baez was hurt by Dylan. . .perhaps seen during the Scorsese documentary from a few years ago. . .with Baez and then some old Dylan interview back to back – and then maybe we saw Don’t Look Back and tried to read between the lines as they were provided to us. . .Dylan is shunning Baez. Maybe she should be getting on stage too! For sure. . .yes. . .definitely! Give something back. . .we think.

So Dylan thanks Baez in this speech –  that feels good – as if a wound I didn’t even realize I had gets some salve. Dylan being humble. . .and shattering the myth – while it’s perpetuated.

But more than anything we’ve been given more by Dylan! Every time Dylan surfaces – whether it’s on Letterman with The Plugz. . .or an interview with AARP – at least he’s not speaking to some British LOOK BACK magazine. . .it’s an endless flowing stream. . .constant brilliance and commitment – even when he’s phoning it in. Who knows what that even means. . .

But seriously – are you aware of this? If you A/B the Plugz performance on Letterman with Infidels – it’s like LIFE and DEATH. The Letterman performance is a jewel. . .a diamond in the rough.

So then from that speech – I get to some Staples Singers. . .and get to experience that for a while. . .

It reminds me of getting into Gesualdo earlier this week. . .Werner Herzog perhaps made a silly and great film. . .eccentric as hell – I mean he’s interviewing the attendants at the buildings where Gesualdo murdered his wife. . .as if they were experts – and maybe they are. It’s strange and out of control. . .there are no boundaries – and I think that’s why the film works.

So I get to spend some time with The Tallis Scholars, The Hilliard Ensemble – as I’m exploring some early vocal music. . .how is this the week in music? 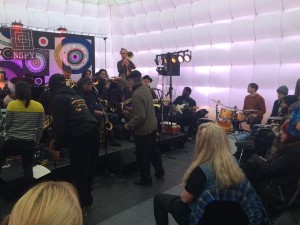 That’s me sitting there in that autumnal sweater, gold sparkle drums, watching drummer Wayne Smith Jr as closely as I can. . .trying to stay in time. I received an email a few weeks ago about workshops, sponsored by Northern Spy Records, happening at a venue called the Sugarcube at South Street Seaport. The Sun Ra Arkestra would be hosting a workshop. . .playing the music of Sun Ra – and it was free. I knew I had to be there and I was also terrified.

I was afraid because I can’t swing. . .and I surely have no business playing with those guys – but the music and life of Sun Ra and his musicians is one of the foremost inspirations of my musical life. There probably isn’t anything as heavy to me. So I packed up my drums and went. . .and figured the worst that could happen was I would be humiliated – and that’s not so bad in the grand scheme.

First of all – the musicians in the Arkestra were incredibly accommodating – so there was nothing to worry about there. . .and also – the music that we played wasn’t too technically demanding. . .I could hang – at least on the surface. There are of course worlds that are not accessible to me at this time.

Marshall Allen is apparently 91 years old. I can’t even contemplate that. When he plays there’s so much energy going into the horn. . .he stands the entire time. What the hell is going on there? How is that possible? I suppose the Sun Ra Arkestra is impossibility made manifest. Nothing about it feels like it can exist in this cynical world – but it does – and it’s valued.

During the Q+A section of the workshop I asked about Sun Ra’s Disciplines because guitarist Dave Hotep spoke about learning the Disciplines when he joined in 2000 – and that’s a song title listed on a ton of live Sun Ra records. What are the Disciplines?

I was told that Sun Ra wrote 100 of them. They were pieces that you had to learn. . .and that Sun Ra felt their performance allowed the band and the audience to experience discipline and actualize it at the same time. Alto-sax player Knoel Scott quotes Sun Ra as saying, “Discipline makes the man,” and that it was a very important concept for Sun Ra.

Scott also described being a young musician in the Sun Ra house – I think he said he was 20 or 21. . .and every morning he would hear Sun Ra playing the piano. Scott described himself as young and very naive. I wondered if the resolution of the story would be something like, “you have to practice everyday,” but it wasn’t of course.

He said that Sun Ra said, (no quotes b/c they aren’t direct, I’m paraphrasing) Well – we are always asking the Creator for things. We want love, we want money, we want security, we want a mate. We walk around this world needing things, demanding things, asking for things. I WANT, I WANT. . .nobody ever gives back. Nobody gives to the Creator. Well every morning, I wake up and I give the Creator a song.